Yamaha FZ-X Bike Price in India: Today in this article we will know more about Yamaha’s new bike FZ-X and will talk about what special features Yamaha has given in this bike. You will also know about the specification, price, color, mileage, and variants of this bike and along with this, we have also reviewed this bike in this article. So let’s start:
Yamaha FZ-X Bike Overview

Yamaha has not told anything official about the FZ-X mileage, but according to the buyer, the mileage of this bike is between 45 – 50 Kmpl.

This is a Yamaha motorcycle. And as you can see, it has a lot of new retro modern design elements and it has also some stuff that makes it look rugged and strong. But this is not the XSR-155 it is the Indian version of it. It goes by the name FZ-X. And as you can figure out by the name, this motorcycle is based on Yamaha India’s most accomplished and profitable FZ brand.

Now one of the main reasons why Yamaha launched the FZ-X in India is because they believe there is a set of buyers who wanted something retro you know they want something different than the other genre of motorcycles. This is why the bike supports a lot of modern visual design elements.

Starting from the front you have a round projector headlamp that is flanked by neatly designed LED DRL. Then this large, brightly painted teardrop fuel tank that also has some decent space to rest your needs. And if you move towards the back, you will notice a single PC that flows well with the overall design language. There’s also this grab rail that looks extremely basic, something a lot of people might not like. But we believe there’s a reason for such utilitarian grappling and we will speak about that in a bit.

The Yamaha FZ-X is a 2023 modular motorcycle so it gets a decent amount of modern features. But the coolest fall is this Bluetooth-enabled spin cluster. It is brand new and even the more expensive FZ 25 doesn’t get it so it makes us buy slightly more desirable.

Once connected to the Yamaha Connect app. The cluster shows the host of notifications like missed calls and incoming call alerts SMS email prompts along with the battery level of the phone. This app also does more by the way. It lets riders see the engine RPM, degree of throttle opening rate of acceleration, and real-time fuel consumption. The app also notifies the rider in case of any malfunction. For safety and security reasons.

The Y Connect app also has the option to show the last parking location. This Yamaha is also equipped with a charging socket that is placed right in front of your eyes. There are also metal calls to take care of the harshness of the Indian Roads. And like we see in some of the Yamaha the bike gets the side stand engine cutoff switch as well. The system doesn’t let the rider ride the bike if the side stand is activated.

Now coming to the practicality or you can also call it a living with it everyday aspect of the motorcycle. I think Yamaha has done a fair job because the overall seating triangle is quite comfortable and it was extremely easy to sit on the bike even though the seat height is slightly taller than the FZ it’s fairly good for an average Indian.

Now if you look at the pegs they are slightly placed forward and the handlebar is easy to reach and then you also have this seat which is wide and well cushioned.

So all these three aspects make the FZ-X an extremely comfortable commuter motorcycle and for the pillion. I think the space is decent and even for those guys who plan to tour a lot, I don’t think you will have any problems loading the bike with some kind of luggage.

As you mentioned at the beginning of this video, the FZ-X is based on the FZ right? So the 149 cc single cylinder air cooled engine, two-valve engine You see yours has been borrowed from FZ.

So in fact, Yamaha hasn’t changed anything about this new model. The power of the doc output, and the compression ratio, it’s exactly similar to the ones the FZ has. The Pfizer gearbox has been completely borrowed from the Yamaha Naked sibling because of such extensive cycle parts shared with its naked sibling, the FZ-X has the same engine character.

The refinement level is really good, the NVH is quite controlled, the power delivery is linear and the engine revs quite nicely. We really enjoyed the mid-range as there’s enough talk to overtake vehicles easily. The bikes field sober till 5000 RPM post that the FZ-X does deliver a fun experience. And if you’re one of those who like to stay at high RPMs most of the time, this bike can do that with ease, but you will have to do with some minor vibrations on the tank and handlebar.

The bike rides on 41 mm telescopic forks at the front and at the back, there is a motor shock with a seven-step adjuster for pre-load. These specs are usually something you see on the motorcycles in the segment.

But what he really liked is the way everything has come together to offer a good ride. We thoroughly enjoyed the low-speed ride. The monsoon has hit Mumbai and the roads have started to show their true colors.

But the FZ-X has been tuned well to tackle the poor roads and stay calm and composed. But yes, the high-speed ride is something that we aren’t truly happy about. Maybe Yamaha found out that being a city bike, most of the time the bike will be at lower speeds. So that’s why not a lot of focus has gone on the quality of its high speed right?

Now coming to the brakes, this entire setup has been lifted off from the FZ-S. So we’re talking about a single disc 282 mm at the front and single disc 220mm on the back. ABS is a single channel and it is standard. Even its weight increase this braking setup works fairly well. The stopping power a decent and you don’t have to pull a lot of effort into the levers. But yes, as you see another comment on motorcycles. The feedback on the livers is quite poor. 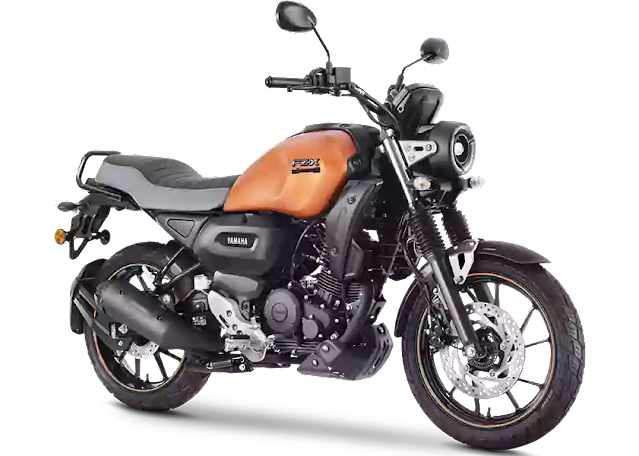 Let’s agree to the fact that the FZ-X is a commuter, or you can even call it a city bike. That’s why you see a low seat height, accessible curb weight and good weight distribution. All these factors have made the FZ-X motorcycle that is super easy and such a joy to ride in the city.

The wide and easy-to-reach handlebar, the fantastic view from the saddle, and the comfortable sitting triangle all come together really well and that makes the FZ-X one practical bike to own in the corners. The bike works decently well, I mean, you might not be comfortable entering and exiting a corner as you would do on FZ-X. But you won’t be disappointed if you are on some twisty roads.

Before we give a verdict on the bike, we have to talk about the bike’s scrambler connection. As you have noticed the bike has lots of metal parts. It gets a pair of four gators, something that we usually see on motorcycles that has to do something with off-road or dark conditions. And at the back, there is this gravel that looks really utilitarian. We believe it’s there to know to complete the overall look and which has to do with ruggedness and toughness. And then there are these button tires that offer a better grip in dirt conditions.
But there is something that confirms the bike scrambler connection and that is in its name X you know a lot of his marketing guys in this company like to relate X to something adventurous or extreme. And we believe Yamaha named FZ-X because they wanted to position this motorcycle as a city bike but can also go a bit off-road. But can it belt Let’s find out. To sum it up the FZ-X can go off-road as well. That means his bike can do well in tier two and tier three cities. But it is not denare so one should avoid jumping around or climbing steep hills.

First, allow me to tell you the pricing of this new Yamaha FZ-X. There are two variants the base model costs about 1.37 lakh rupees on the road, Mumbai, and the more expensive which is a premium when it gets the additional Bluetooth-enabled cluster that costs up is 4000 rupees more and which takes the under pricing to 1.41 on the road.

But the question is should you buy the new FZ-X? Well, there are a few things you should be knowing before you decide on this bike. Firstly, the ZX is aesthetically pleasing. I mean, I know this might sound a bit controversial for a few people, but the bike does look good in person and it kind of grows on you. And the oral body proportion and the styling. This is something a lot of Indians are definitely going to like. And there are a few features that are decent, especially the Bluetooth instrument cluster, and the kind of information that offers at this price point I think it’s a really good deal.
The engine to it is nice, and refined, churns out a good performance, and also has decent overtaking abilities. And there is this clutch which is easy to pull and use. The five-speed gearbox works fairly well now plus the overall riding dynamics of the motorcycle are extremely friendly, thanks to the overall comfortable ergonomics. So if you’re looking for a motorcycle that you want to commute to work on an everyday basis and do that in style, you should definitely consider the new Yamaha FZ-X. But if you want something sportier, then you should check out the FZ-S.